Abbkine handsel you the method of cell proliferation detection!

Cell proliferation refers to the increase in the number of cells caused by cell division, which is one of the important physiological functions of cells. Cell proliferation is the basis of organism growth, development, reproduction and heredity. The main characteristics of eukaryotic cell proliferation are the replication of genetic material and enhanced cell metabolism. Monitoring the growth rate of cell populations is necessary for the study of cell status, for example, uncontrolled cell proliferation can be detected in tumor tissues.

Determine cell proliferation by detecting proteins related to cell proliferation. Ki67, PCNA, etc. are all proteins related to cell proliferation, which are mainly used to detect the immunoassay of cells in the late G1 and S phases. In particular, the application of Ki67 has been more maturely applied to the clinic. The IHC method is used to detect the expression level of Ki67, which can directly and effectively distinguish the proliferation activity of tumor cells. Therefore, Ki67 is a standard for analyzing the growth rate, development speed, and degree of malignancy of malignant tumors. The higher the percentage of Ki67, the faster the tumor growth rate and the higher the degree of malignancy. 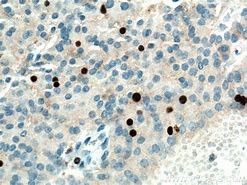 The metabolic activity of enzymes in mitochondria can be measured by adding tetraimidazole salt to cells. Living cells can reduce the tetraimidazole salt into colored formazan or formazan, which can be detected by spectrophotometer or microplate reader. MTT, XTT, and CCK-8 methods all use this principle to detect cell proliferation.

The chemical name of WST-8 in the CCK-8 kit is 2-(2-methoxy-4-nitrophenyl)-3-(4-nitrophenyl)-5-(2,4-disulfon) (Acid benzene)-2H-tetrazole monosodium salt, which is reduced by the dehydrogenase in the cell to a highly water-soluble yellow formazan product under the action of the electron carrier 1-Methoxy PMS. The amount of formazan produced is directly proportional to the number of living cells. The CCK-8-based kit can detect cell proliferation with high accuracy, and is much more sensitive than the MTT method and XTT method, and can detect a lower number of cells. The kit can be applied to adherent or suspended cells cultured in 96-well plates, and the operation is simpler. The experiment can be completed in about 1 hour, and it is less cytotoxic. But CCK-8 is an indirect method, which reflects cell activity rather than whether it is proliferating.

3.Detection of cell proliferation/toxicity based on DNA synthesis

The new assembly and synthesis of DNA is a necessary condition for cell growth, so it is often used to detect cell proliferation, cell viability and apoptosis. BrdU and EdU are both non-radioactive analogs of thymine, which can be incorporated into the DNA of proliferating cells. The amount of DNA synthesis can be determined by detecting BrdU and EdU. This type of method can directly detect cell proliferation and is the most accurate and reliable detection method. Among them, the EdU method uses a "click" chemistry method to covalently cross-link the acetylene group with the fluorescent azide. There is no need to add detection antibodies or denaturate the DNA. The cells to be tested can be subjected to subsequent experiments.

The methods of cell proliferation detection are dazzling, and users need to choose the most suitable method according to the actual situation of the experiment and scientific research needs. 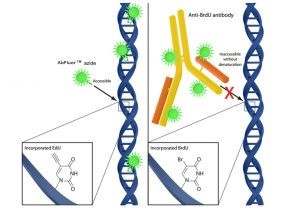