EdU, named as 5-ethynyl-2-deoxyuridine, is a nucleoside analogue of thymine. Its alkyne groups are rare in natural compounds and can replace thymine (T) to infiltrate into the synthetic DNA molecule during the period of DNA replication for DNA synthesis. It is widely used in experimental researches such as cell proliferation.

The name of BrdU is 5-bromo-2 ' -deoxyuridine. BrdU is a synthetic thymine analogue of thymidine, which is incorporated into the newly synthesized genomic DNA in the mitotic S phase. Subsequently, DNA denaturation was performed to determine BrdU insertion and any other cellular surface and / or intracellular target of interest through cell staining.

EdU can be incorporated into the newly synthesized DNA instead of thymidine during DNA synthesis. It has been reported that EdU, as a substitute for BrdU, is easily incorporated into cellular DNA and accumulates in the nucleus during DNA replication. The successful combination of EdU represents the benefit of small enough alkynyl labels. On the other hand, the ethynyl group on EdU can interact with fluorescently labeled small molecule azide probes (such as Azide Alexa Fluor 488, Azide Alexa Fluor 555, Azide Alexa Fluor 594, Azide Alexa Fluor 647, etc.) through monovalent copper ions ( The catalysis of the reduction of Cu2+ by the reducing agent vitamin C) occurs in a covalent reaction to form a stable triazole ring. This reaction is very rapid and is called the click reaction (Click reaction). As shown below: 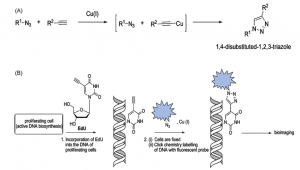 Diagram of EdU-labeled DNA in cells and Reaction principle

EDU and BrdU are both used as methods to detect cell proliferation. Is there any difference between the two?

（1）Using traditional immunofluorescence staining ( BrdU ) to detect cell proliferation requires DNA denaturation, antigen repair, antigen-antibody overnight incubation, too many and complex steps. Moreover, due to the large BrdU antibody molecule, BrdU embedded in DNA molecules cannot be directly combined with BrdU antibody. DNA denaturation must be carried out to expose the BrdU antigen epitope, but the degree of denaturation may lead to wrong results. If the degeneration is not sufficient, the BrdU will be difficult to expose and can not be detected, and the denaturation process will infiltrate from the edge to the middle, resulting in uneven degeneration of nuclear DNA and blurred edges. Excessive denaturation can lead to DNA fragmentation and even degradation, resulting in non-uniform nuclear staining. In addition, the antibody quality of different antibody reagent companies is inconsistent and the antibodies used sometimes interfere with the antibody-based detection of other target proteins, making it difficult to ensure the repeatability of the experiment and easy to produce false positive results. it has many influencing factors and poor stability. Compared with the BrdU method, the EdU method for detecting cell proliferation does not require DNA denaturation, antigen retrieval, and antigen-antibody reaction.

（2）EdU cell proliferation method is simple, sensitive, convenient, rapid and accurate, without DNA denaturation, and can be labeled with various antibodies or fluorescent proteins at the same time to detect other characteristics of cells, which is the best choice for cell proliferation detection.

（3）The EdU cell proliferation assay can directly and accurately detect the synthesis of new DNA. This assay is capable of measuring not only the proliferation of individual cells, but also proliferating cells in cells, tissues or whole organisms by any platform.

The kit components are as follows: 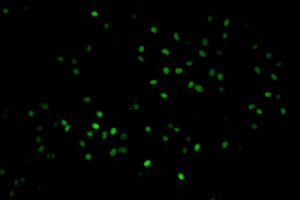 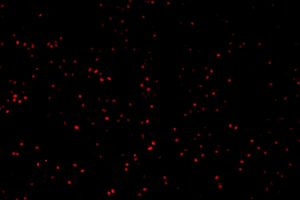